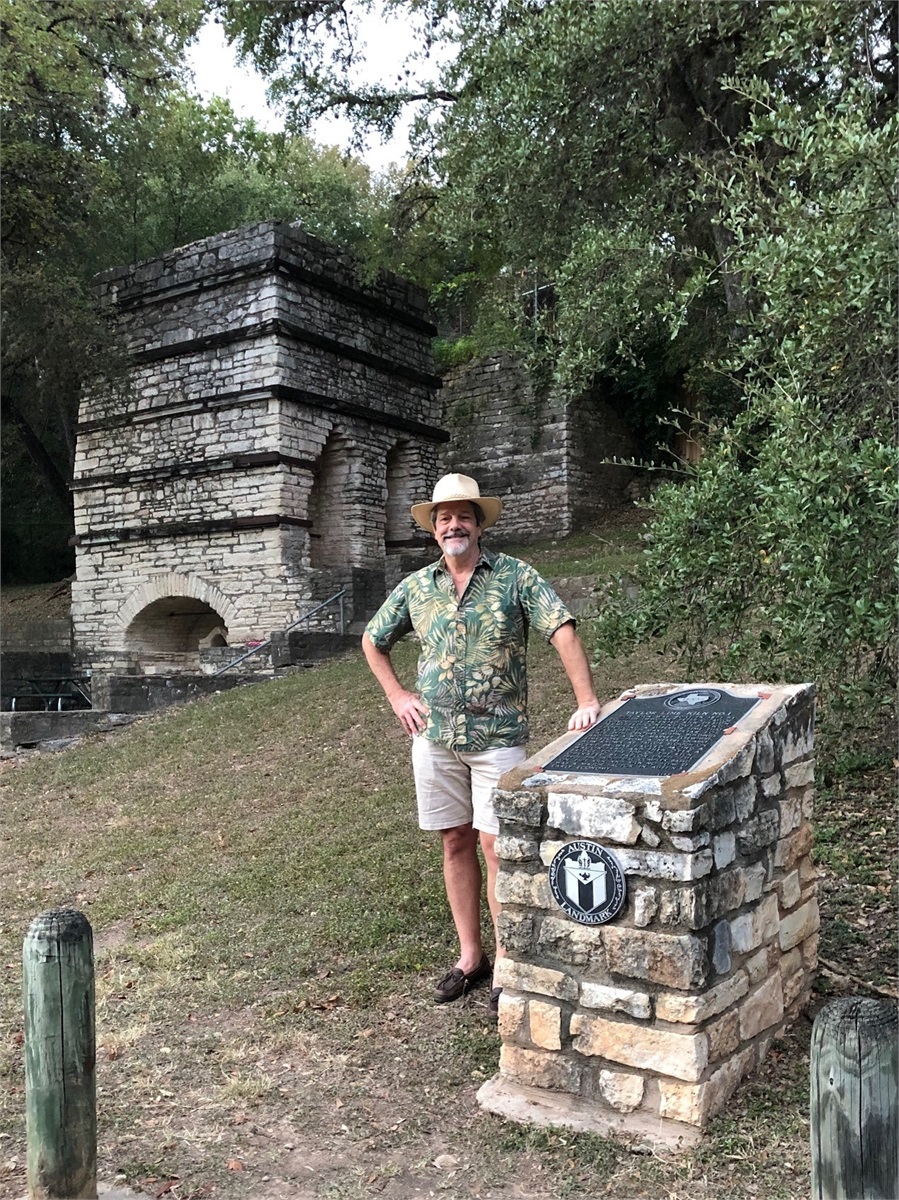 When my parents settled in Tarrytown in the early 1950’s, very few homes or other structures existed west of Pecos Street.  My mom recalls that Bridle Path just west of Pecos, where she and dad bought a home, was still a dirt road back then.  The term “Cedar Choppers” which today is slang for a hillbilly settler on the fringes of a community, was in those days, a necessary occupation.  But even more important than clearing the cedar for homesites or fence posts, was making the bricks and mortar to build the sturdy homes and buildings of a growing city.

Michael Butler, an Irish immigrant brick layer who arrived in Austin in 1873, quickly became the king of local brick making.  Butler bricks are found in structures all over Austin to this day.  The Capitol and several historic buildings on the original Forty Acres of U.T. contain Butler bricks.  But bricks are no good without mortar to cement them together.  And while Mr. Butler was stamping out bricks, much of the mortar that would be needed to actually build something with them was being manufactured at an industrial site a few miles to the north, and just west of what would become Pecos Street in Tarrytown.

Another immigrant of the 19th Century, Peter Calder Taylor, established a lime smelting business on wooded land near a marshy cove along the Colorado River.  He mined limestone from the riverbed and carted it up to a massive brick furnace designed to burn round-the-clock and create the kind of heat necessary to fracture the sedimentary rock back down to its sandy grade.  That lime powder became a key ingredient to the manufacture of Taylor cement.

Long after construction methods had evolved and bricks and mortar were replaced by steel, the land Taylor originally purchased in the 1800’s was turned over to the citizens of Austin.  In 1954 it became Reed Park.  The only sign of the property’s industrial past was the giant brick lime kiln still standing at the park’s western edge.

Growing up in Tarrytown I remember marveling at the old relic.  It was variously a haunted castle, a fearsome fortress, and an oversized barbecue pit.  Equipped with my dad’s 8-millimeter Bell & Howell movie camera, I filmed my buddies and me as we played various fantasy characters around the Taylor Lime Kiln and up and down the creek that ran down to Taylor’s Slough.  The dense stand of bamboo that lined the creek provided the jousting batons, spears, and missiles we required for our imaginary conflicts.  An old wooden bridge that spanned the creek often became the setting of dramatic but silent movie climaxes to our 3-minutes per reel sagas.  These all developed into unconnected short films at the Fotomat in Casis Village.  Little cinematic bricks that today rest in a cardboard box in storage with no mortar to edit them together in a coherent story.

The mortar made at Taylor’s giant kiln in Reed Park held together many of Austin’s early homes and buildings, but it could not hold fast my childhood days.  And the bricks of Butler’s factory formed the individual puzzle pieces of the city that was and is my hometown.  Yet they made no coherent or lasting impression without that mortar binding them into the structures that would define the Austin of my later years.

I ask my clients at Current Investments to provide the design of their post-career lifestyle.  I then help them build a plan that will strive to put all their financial building blocks in place to help them reach those goals.  Just as P.C. Taylor provided the cement that held Butler’s bricks in place, my job is to provide the integration of an individual’s wealth assets into a financial structure that supports the good life they’ve worked hard to achieve.

And my mom, who once lived in a small house on the ‘dirt road’ side of Tarrytown in the early 50’s, now lives happily retired at Westminster Manor, a sturdy building of bricks and mortar.  Let’s talk about building a financial home for your dreams!