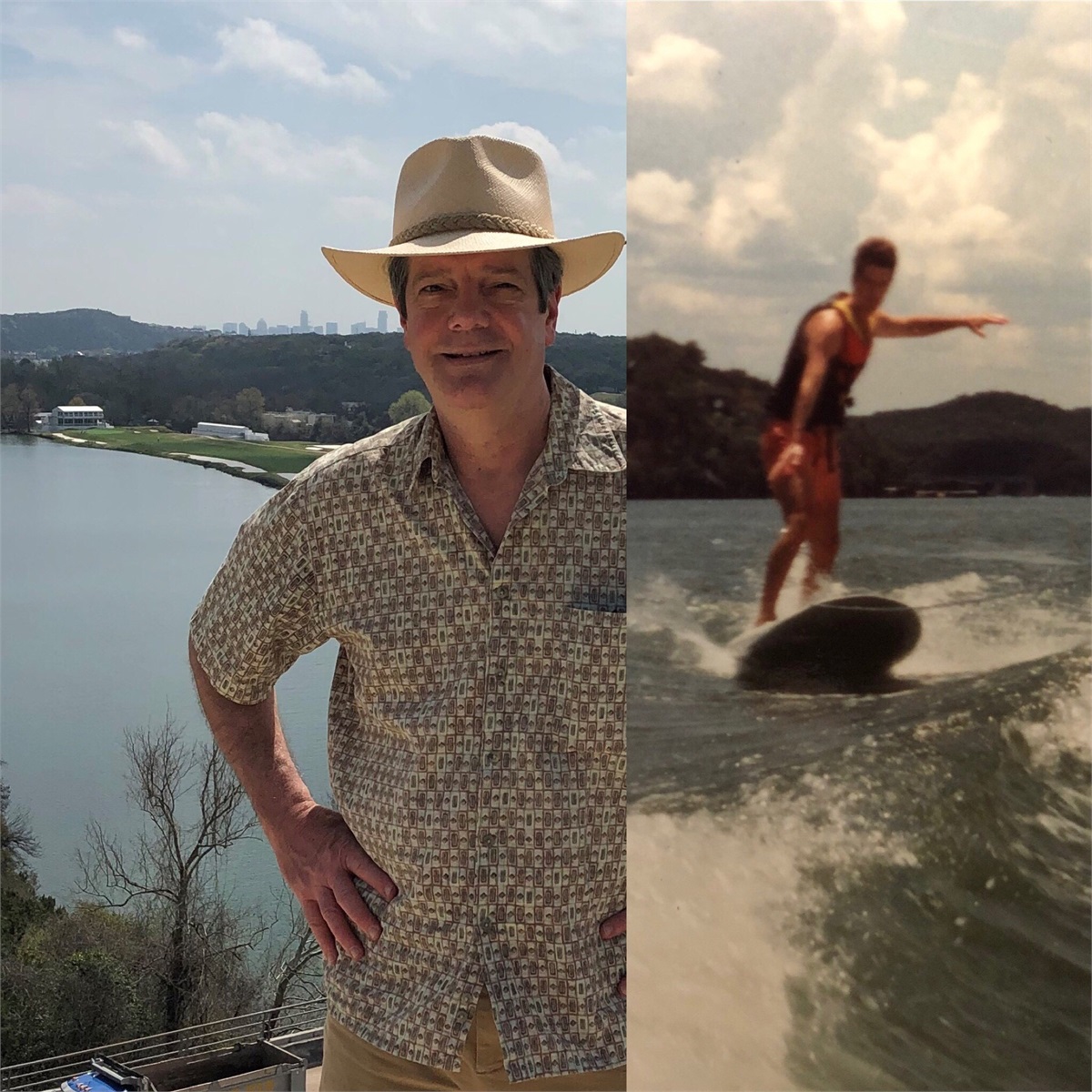 Growing up on the banks of Lake Austin made for a charmed childhood and truly tremendous teenage years.  Whether in my family’s green Glastron ski boat, or joining friends in theirs,  I could spend many days through high school and well into my college years at the University of Texas, out on that 22 mile stretch of the Lower Colorado River between Mansfield and Tom Miller Dams.

On any given warm September morning we’d hit the lake just after sunrise to get in a few slalom runs before heading to class.  Our Glastron boats slipped out of their docks and headed down to the Kennelwood Marina.  Glastron was the essential brand of speed boat on the lake.  One of the founders of that innovative fiberglass hull manufacturer lived just a few docks over when my family lived on the lake.  At Kennelwood the ever-friendly Mrs. Kyle, would appear to sell us a fill up from her fuel pump.  The Kennelwood docks were just a quarter mile up-river from what back in those days we knew as “Boat Town”, now the much more sophisticatedly named “Oyster Landing” (well la-tee-da!).

In the early morning hours, the surface of Lake Austin was usually as smooth as glass.  Some days however, the currents ran strong depending on how much water the Lower Colorado River Authority was allowing to flow through Mansfield Dam from the much larger Lake Travis just above Lake Austin.  Wind could also stir up the surface of the water making skiing a bit more of a challenge, but on those perfect glass days the white plastic bleach bottles marking fishermen’s trotlines served as our slalom courses.  Sure, we irked the dedicated sportsmen who were trawling slowly in their aluminum jon boats as we powered by and left them rocking in our wake, but we seldom cared.  The lake was our playground.

Lake Austin was also home to a particularly fertile species of plant life known commonly as “seaweed”.  Growing up from the muddy bottom, the seaweed formed thick patches just below the surface waiting to entangle anything that swam or skied through it.  If a skier wiped out in one of those dark green patches it could be unnerving as the seaweed enveloped your legs and torso.  But we learned to coexist.  At times we had fun with it.  A skier waiting in the water for the boat to pull him up would sometimes see how much of the slimy vines he could drape over himself.  Then as the boat accelerated he would pop up on the ski resembling something from Captain Nemo’s worst nightmare.

Every few years in February, the LCRA would lower Lake Austin to allow boat dock owners to perform maintenance and to at least with hope, rare freezing temperatures would kill as much of the exposed seaweed as possible.  When the lakebed was exposed for these handful of weeks, we’d don our knee-high rubber boots and embark on expeditions in search of buried treasure, lost Rolex’s, other jewelry, and such.  Alas, the most common finds were old beer cans, broken fishing lures, and clam shells.

In the early 1980’s, construction began on the Pennybacker Bridge.  The now well-known twin steel arches that span Lake Austin along Loop 360 were built in sections that utilized barges to support cranes and other machinery out over the water.  But the flow of Lake Austin was never completely obstructed during the building of the span, and the presence of the mid-river construction zone didn’t slow us down a bit.  We skied past crews wearing hardhats on the way down to a rope swing that hung from a sturdy oak branch stretching out over the water.  After a few back flips off the swing, it was time to venture on down to Ski Shores or The Pier across from Lake Austin City Park (now Emma Long Park) for a plate of greasy nachos and a couple of cold Shiner Bocks.

On wilder outings, another group of friends would join us in a second ski boat.  A favorite stunt involved each boat traveling in parallel and pulling skiers in both wakes.  We amateur stuntmen would lean in toward each other, grab the opposite rope, exchange handles, then peel away completing the “boat switch in mid-run.  On nights when the moon was out and the water smooth, a midnight ski was a scary thrill.  Needless to say, those days and nights making waves on Lake Austin has us feeling like the entire world flowed with us.

Through the currents of time and the journey we make down the river of life we all experience happiness and occasional hardships.  I use these analogies when I visit with clients of my investment firm, Current Investments Wealth Management.  Just as an actual river flows, financial markets move in currents as well.  Though the way markets move is beyond our ability to control, with an experienced guide we can navigate whether the flow is going our way or working against us, glass smooth or rough and choppy.  Whether you’re pulling risky stunts on water skis or putting hard earned money to work in an investment strategy, use the conditions and the current to your advantage.  And always be willing to make waves.