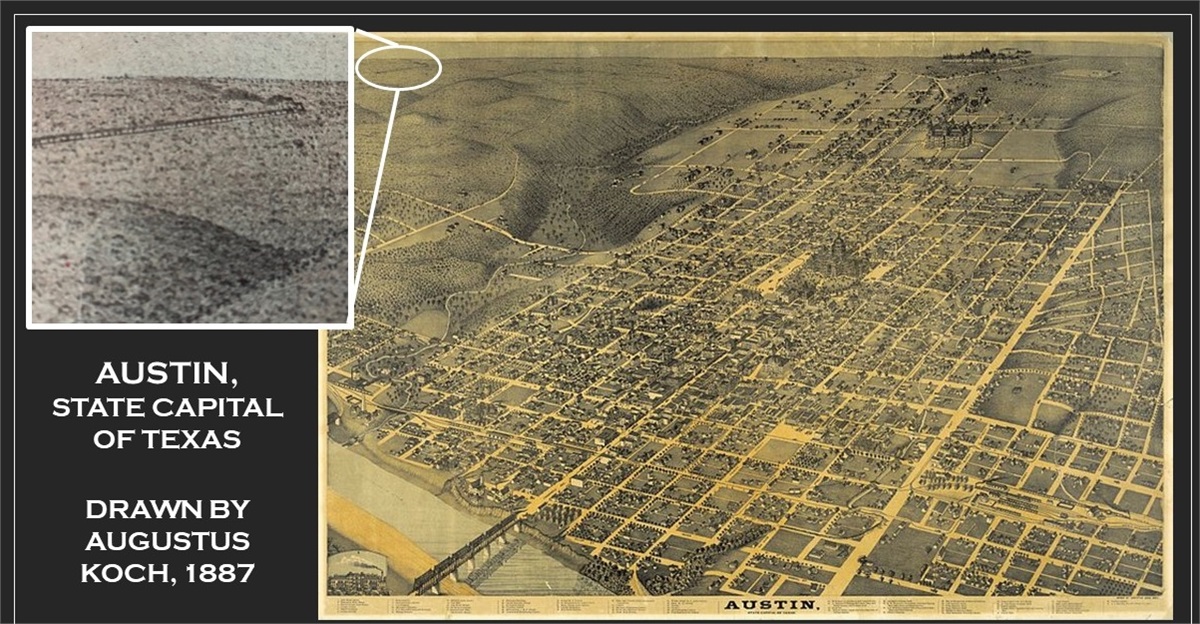 If you peer into the far upper-left corner of Augustus Koch’s famous 1887 illustrated map, “Bird’s Eye View of Austin”, you can just see it.  Far in the distance of this detailed map, beyond the city’s western edge which at the time was defined by Shoal Creek, a steam locomotive hauling freight cars is visible chugging along a rail line that skirts the rising hills on the horizon.

The year Koch drew his map, that one rail line connecting Austin to the rest of Texas and the nation, was a southward spur of the Missouri-Pacific Railroad out of St. Louis.  After a stop at the main depot at Congress Avenue and Cypress Street (now 3rd), the train headed west then swung north at Johnson Creek.  It then bisected the 365-acre farm of former Texas Governor, Elisha Pease.

By the early 1920’s, Austin neighborhoods pushed out beyond Shoal Creek and expanded onto the Pease lands that had been purchased by prospective home-builders.  Streets began to carve up the fields.  Many of those new streets bore names that honored Governor Pease’s birthplace state of Connecticut, including Enfield, Windsor, Hartford, and Winstead.

Moving down the tracks of time, by the late 1960’s, Austin’s Tarrytown, West Enfield, and Deep Eddy suburbs, and the automobiles their residents drove, required that the city lay out a westside expressway.  The wide easement of the Missouri-Pacific railway presented the obvious location.  Though some neighbors rose up in protest while homes that were just too close to the planned traffic lanes along Winstead on the west and Newfield Lane to the east fell to eminent domain and demolition, many more were anxious that the highway would make getting where they were going much, much easier.

I remember riding my bicycle from our home on Scenic Drive over to the newly cleared corridor of land.  Passing only mounds of dirt and gravel, I was on the way to meet friends down at the tracks.  We would tape nickels and quarters to the steel rails so they wouldn’t vibrate off as the still regular runs of heavy Missouri-Pacific freight cars rolled by squishing those coins into oddly prized, oblong mementos of our childhood.  We were young, but careful, and fortunate that none of my buddies nor I were ever squashed.

When the cement pavement began to pour in sections a few miles at a time, our interest in the train tracks gave way to drag racing.  Initially we’d race our bicycles.  Later the lucky ones with Honda mini-motor bikes staged rallies on the still under-construction freeway.

In 1975, enough of new expressway was complete.  Officially designated Texas Loop 1, but affectionately christened “MO-PAC” after the Missouri-Pacific rails at its center, the lanes opened to the automobile.  Fortunately, I got my drivers’ license three years later and found a whole new use for my former playground.  In 1981, my senior year at Austin High, Mopac extended all the way north to Anderson Lane and the brand-new Village Shopping Center and cinema four-plex.  It seemed at the time, an awfully long drive to Austin’s northern outskirts just to see a movie!  But the Mopac Expressway made getting where you were going a sure and straight shot.

Today I look out from my Current Investments office at Mopac and Far West Boulevard to see cars zipping by, and the occasional trains that still rumble along beside them.  My clients and I talk about different investment vehicles, routes, and the long-haul runs their portfolios may take bound for  destinations defined as a post-career lifestyle, a secure retirement, or a next act in the story of their lives.  My memories of Mopac and the venerable rail line after which it was named, remind me that if we stay current with the times while building plans for the future, we stand a good chance to get where we’re going.