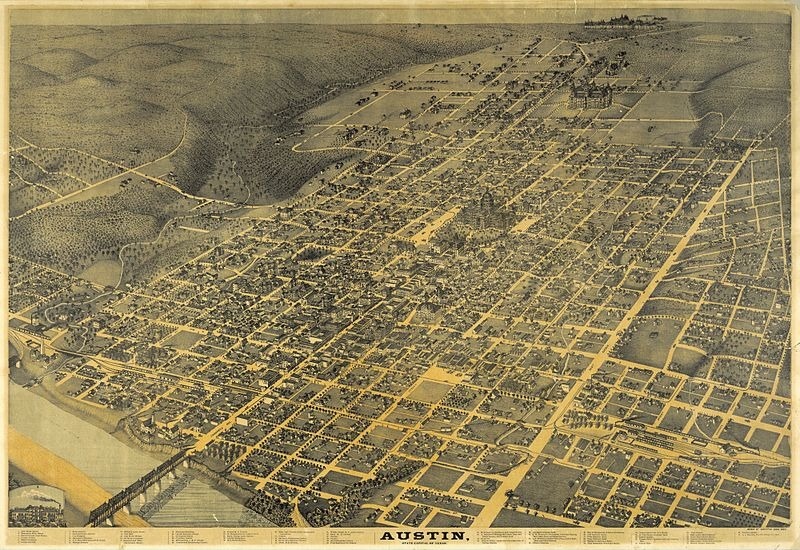 We often read to escape to another place or another time.  In a world that seems to change dramatically almost every day, a good story set in another time can take you on that escape even if the place setting is the very ground under you now.  The colorful history of Austin has fascinated me since my days as a kid growing up here.  From the ancient limestone furnace in Reed Park to the Sweet Home Baptist Church and the Treaty Oak in Clarksville, reminders of earlier eras in our city’s history give me a tremendous sense of place and a greater desire to interpret my surroundings.

Two of my favorite books tell the origin story of Austin.  One is pure history, one historical fiction.  Together they paint a vivid picture of how Austin came to be through the adventures of the first pioneers who settled along bends in the Colorado River northwest of the frontier town of Bastrop, the slaves they brought with them, and the Native Americans they encountered who were the true, original human settlers of a much earlier era.

History of Travis County and Austin: 1839 – 1899, by Mary Starr Barkley, is the definitive non-fiction account of Austin’s first six decades.  Published in 1963, Barkley’s work relies on extensive research into official records, manuscripts, letters, and maps held in the State Archives, county and local libraries, and first-hand interviews with descendants of early settlers still living at the time.

Many familiar place names we know today come from the pioneer families of Anglo-European descent who moved west from Stephen F. Austin’s “Old 300” colony in the 1820’s.  There were Hornsby’s and Wilbarger’s.  William Barton set up his homestead where chilled water from deep springs flowed into the muddy Colorado.  John F. Webber (Webberville) served on the surveying crew that laid out the boundaries of Travis County.  Henry Pfluger, a German immigrant, brought his eight sons to the area and established his namesake village, now Austin’s suburb, Pflugerville.

Barkley’s history passes chronologically through the key epochs in Austin’s development: the era of The Republic of Texas and location of the Capital here, the dawn of U.S. Statehood and the Antebellum period, the Civil War and Reconstruction, and the transition from frontier town to industrializing city in the last generation of the nineteenth century.  The author includes mention of an early legend in Austin’s story, the 1838 buffalo hunt along a clearing in the trees that rose above the banks of the river.  There as the story goes, Mirabeau B. Lamar, the second President of the Republic of Texas, chased a buffalo up what would become Congress Avenue and shot his prey on the hill where the Texas Capitol building stands today.  Mary Starr Barkley doesn’t take a firm position on whether this event is actual history or only one of Austin’s favorite folklore tales.

In the genre of fiction, or more precisely, historical fiction, the best book about Austin’s origin is The Borderland, by Edwin “Bud” Shrake.  Shrake’s novel, published in 2000, brings together figures from history, including Mirabeau Lamar and Edwin Waller, along with characters created and perfectly suited to the rough-hewn wooden cabins and crisscrossing dirt paths of his story’s setting: Austin of 1839.

Scottish immigrant and physician, Dr. Romulus Swift arrives in the frontier village that year with his sister, Cullasaja, and soon encounters the thick-skinned and thickly accented German foreman, Fritz Gruber.  Gruber bears the jagged hairline and hideous scars of having survived a scalping by the Comanche tribe living in the rolling hills west of Shoal Creek, then the furthest out from town the white settlers could safely venture.

It is the way Shrake includes and personifies the Comanche people and their perspective on the invading “men with hats”, that makes The Borderland such an endearing story.  His use of the word “Comancheria” to describe the rolling terrain known today as Pemberton Heights, Tarrytown, and West Lake Hills, conjures images of tribal gatherings around campfires where the next raid on Austin might have been plotted.  The eventual clash of these cultures leads to a dramatic climax in the hills west of Austin.  Shrake’s novel paints the life, the people, and the struggles to establish the town called Austin with all the strokes of a master storyteller.

While memories and stories of our history will inform and entertain us, it is always the future we have yet to live.  At Current Investments, where I serve as portfolio manager and investment advisor, I always enjoy hearing my clients’ origin stories, and helping them write the story of their future success.  Though I remind them of my profession’s well-worn disclaimer, “past performance is no indication of future returns.”  But a good story about lessons learned from the past can often reassure them that as Mark Twain put it, “history doesn’t repeat itself, but it often rhymes.”  Fortunately, the story of Austin is still being written.