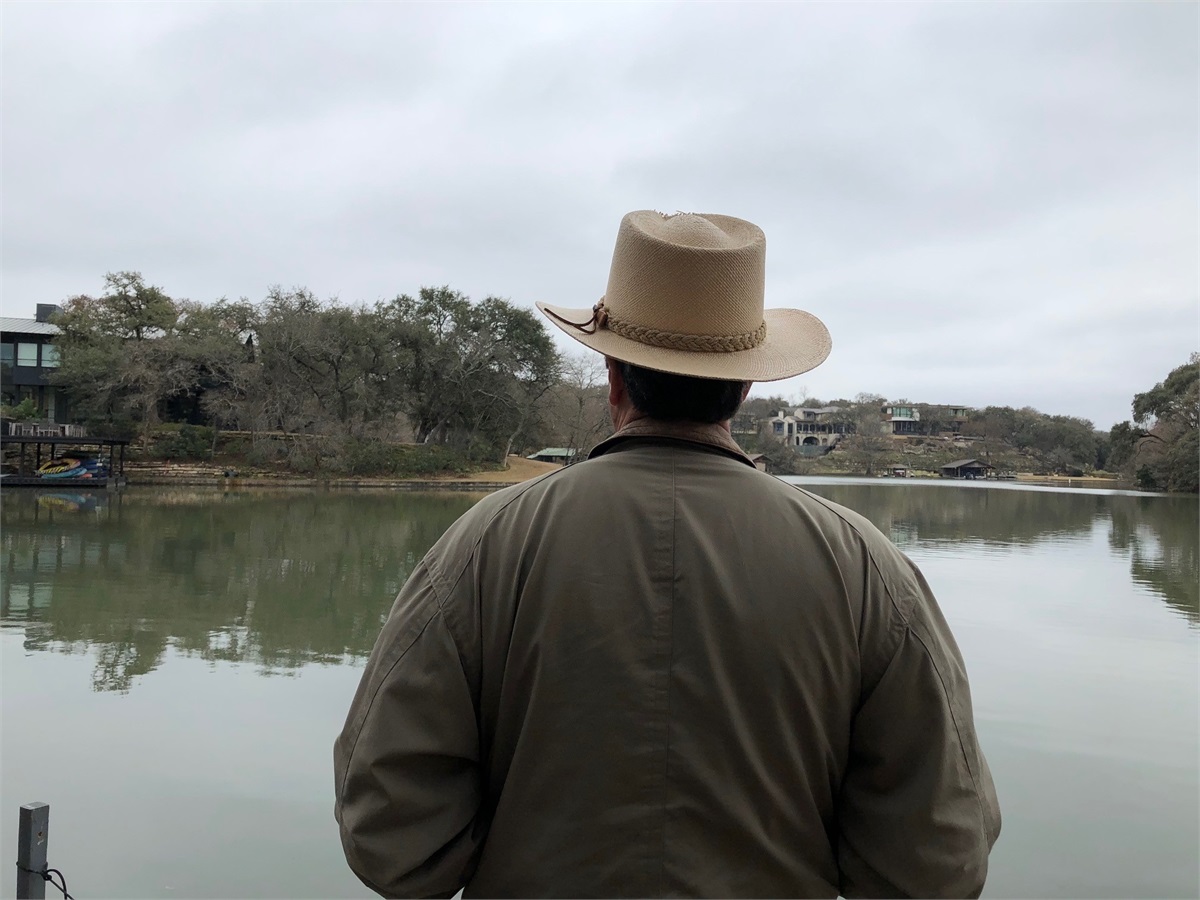 The Feature from the Blue Lagoon

Downriver from Mt. Bonnell, the waters of Lake Austin form a peaceful lagoon tucked away from the main channel which continues its course toward the Tom Miller Dam.  The lagoon, never given any other proper name, is the site of The Contemporary Austin – Laguna Gloria art museum, Mayfield Park next door, and a couple of dozen private homes that line its curving shoreline.  The earliest and still most beautiful of the waterfront structures is the 1916 Italianate villa built as a summer home for “Austin American” newspaper editor, Hal Sevier and his wife, Clara Driscoll.  After naming their estate, “Laguna Gloria”, Mrs. Driscoll spent decades, long after the death of her husband, tending the magnificent, terraced gardens on the property.  In 1943, she donated the home and its grounds to the City of Austin for use as an art museum.

As the Tarrytown neighborhood expanded west of Pecos St. in the 1950’s and 60’s, homes were built on the shore of the lagoon across from Laguna Gloria.  My family was fortunate to move to one of those homes on Scenic Drive in the mid-1960’s.  Many of my happiest experiences of youth were spent on the blue-green waters of the little lagoon in our back yard.  I even came to regard the Laguna Gloria art museum grounds, which I could reach easily in my rowboat or with a short swim, as an extended back yard as well.

That lagoon was the setting for many adventures, whether rowing out to explore the reeds and lily pads near the opening to Lake Austin or navigating up into its narrowest reach to see what monstrous bass and catfish lurked in the shady shallows.  The lagoon provided me all the wonderful adventures a boy could imagine.  But I never imagined it would also become the set of a Hollywood feature film.

In 1977, a film production crew came to Austin to shoot an action-comedy called, “Outlaw Blues”.  The story concerned an aspiring song writer just released from Huntsville Prison, who comes to Austin in hopes of making a name for himself in country music.  With Peter Fonda in the lead role and Susan St. James playing his character’s love interest, this was a rare for the times, full-blown Hollywood movie filmed on location in Austin.

As the plot unfolded, our hero, “Bobby Ogden” (Fonda) finds himself in trouble and once again on the run from the law.  He and “Tina” (St. James) head to the waterfront home of a friend and local record producer, not knowing that the Austin Police had been tipped off and were heading that way too.

All this cinematic drama went down at the home of one of my lagoon-side neighbors.  On the day of filming, my friend and I met on the Laguna Gloria shore directly across from his family’s boat dock to watch the shoot.  Sound and lighting crew grappled their gear into place as the director led the actors through their marks.  Not realizing how sensitive the parabolic microphones used on the set really were, my friend and I continued to talk about the sights unfolding about 100 feet across the lagoon from us.  Suddenly, one of the sound crew grabbed a bullhorn and pointed it our way.  “You boys keep quiet now, we’re beginning the scene!”

“Action!”  The actors emerged from the house and headed to the boat dock.  After a brief exchange of dialog heard only by those powerful microphones and the cast and crew on the dock, the “cops” came busting out of the house in pursuit of our outlaw hero and his lady.  Fonda and St. James hopped into the ski boat and revved the engine.  “Cut!”  Then extras dressed identically as the stars took their place in the boat.  A crew boat floating in the lagoon nearby moved into position to film the dramatic getaway.  After a few more takes of the whole sequence, including a long shot of the ski boat carrying the stunt doubles of Fonda and St. James speeding across the lagoon and out toward Lake Austin, the crew stuck the set and within a few hours, left no trace that Hollywood had visited our quiet lagoon at all.

A bit of little-known trivia about the climatic finale where Austin Police boats chase the fugitives down the lake toward Tom Miller Dam.  The stunt doubles plunge overboard into the water just as their boat sails over the edge.  The scene cuts hard to a shot of an empty ski boat falling to the rocks below in Lake L.B.J.  just below Inks Lake Dam where it bursts into flames upon impact.  The editor spliced it perfectly!

Telling stories through the memories of childhood or the magic of Hollywood feature films, forms a valuable part of our life experience.  I enjoy using stories and anecdotes when working with clients of my firm, Current Investments Wealth Management.  They help paint a picture or a scene of where we want to go in our journey to invest hard earned money.  And like the currents of a river or the still waters of a lagoon, all the different possibilities we can encounter along the way keep us looking forward as our stories unfold.