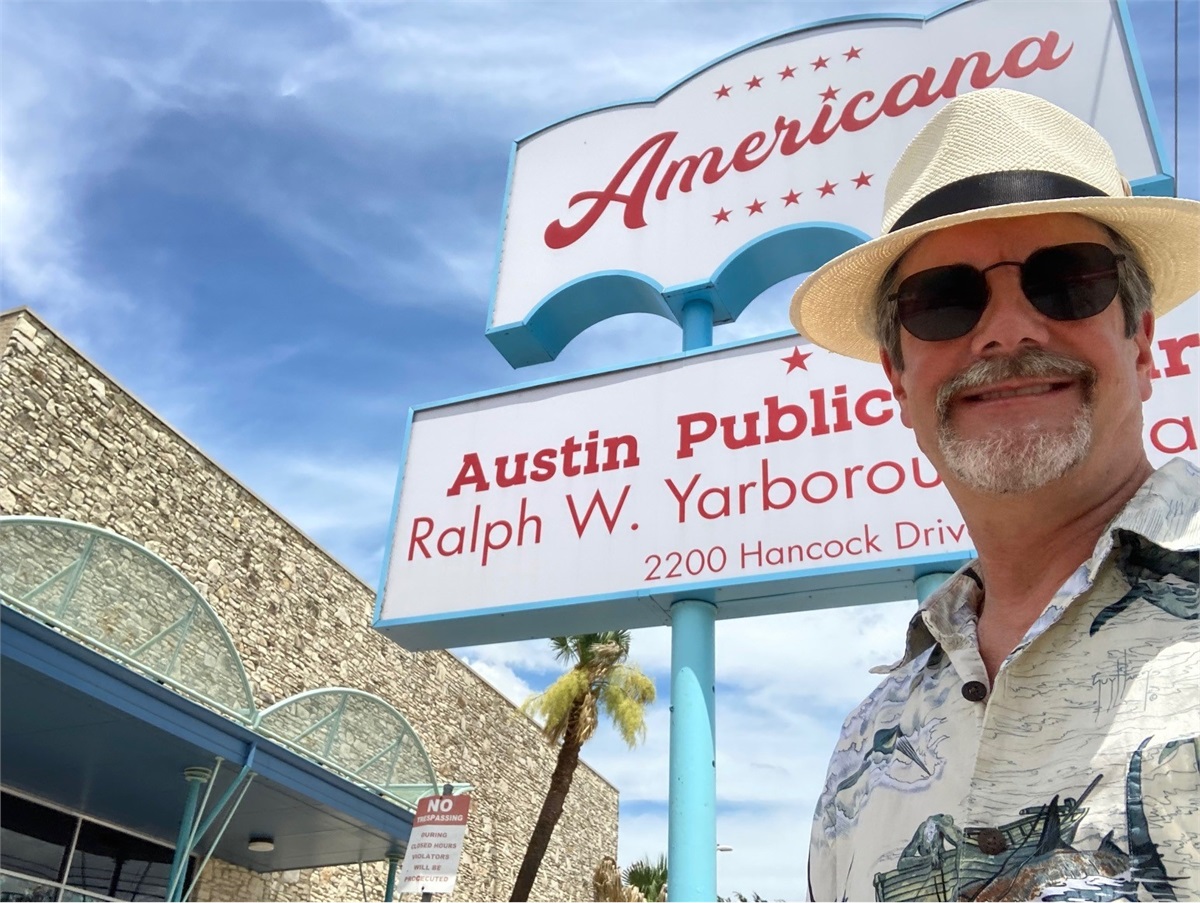 As the summer doldrums in Austin wear on, I am grateful my hometown has so many fun ways to cool off.  Jumping into the refreshing waters of Lake Austin or the neighborhood pool in Reed Park were easy retreats from the heat as a kid growing up in Tarrytown.  The chilly oasis of Deep Eddy Pool and of course, Barton Springs beckon to this day.  But I fondly remember too, many dark, air-conditioned escapes into some of Austin’s great movie theaters.

The greatest and oldest of all, The Paramount on Congress Avenue, began its Summer Classic Film Series in the 1970’s.  I wasn’t much of a fan of “old” movies back then.  For the 70’s was also the decade that gave rise to the Summer Blockbuster film phenomenon.  Standing in a long line outside a theater became a cultural event.  That’s where I wanted to be.

So, I was there, standing in a long line in the hot summer sun of 1975, waiting to buy tickets at the brand new, Highland Mall Cinema, to see the latest hit film called, “Jaws.”  Plot summary (for those few who don’t remember): a giant creature from the deep, dark water below, with rows of really, sharp teeth, comes up and eats anyone stupid enough to go swimming, accompanied by the scariest soundtrack ever recorded.  For the next few months, jumping in the dark waters of Lake Austin was a bit intimidating.  My post-traumatic teenage brain had me convinced that some species of fish Steven Spielberg used as the model for his movie shark lived just this side of Mansfield Dam.  So, I went to more movies instead.

North on Airport Blvd. from Highland Mall stood the Fox Theater – now a Mercedes Benz showroom.  There, my dad took me to see the Disney adventure film, “The Island at the Top of the World.”  No sharks in that one, only Killer Whales and a really cool airship!  My dad paid the manager for the promotional, four-foot-long model of that airship hanging in the lobby.  It hung in my bedroom for many years afterwards – thanks dad!

The once great, single-screen, “Americana” theater on Hancock Drive (now the Yarborough Branch Library) had me in a seat to see Charlton Heston in “Earthquake,” and experience the short-lived Hollywood gimmick called “Sensurround” – basically an extra set of giant sub-woofers hung from the auditorium ceiling to create teeth-rattling vibrations of the rumbling sound effects.  However, this made it hard to hear Heston while half of Los Angeles crumbled around him.  I swore I heard him yell, “Get Your Paws Off My City You Damn Dirty Quake!”  Or something like that.

Teenage trips down to South Austin to catch a flick usually led to the Aquarius Theater on Pleasant Valley Road (James Bond in “Moonraker”), or the Riverside Theater just around the corner on Riverside Drive.  There, friends and I would gather at midnight for the umpteenth screening of the cult-classic, “Rocky Horror Picture Show,” equipped with rice and ready to yell in unison, our cultish one-liners.

Another long-lost screen stood on North Lamar about 2 blocks south of Koenig Lane.  “The Stallion” was a restaurant with a drive-in theater – it was both a surviving example of the throw-back drive-ins of an earlier era of entertainment, as well as a precursor to the ubiquitous and luxurious ‘meal and a movie’ venues we have today.  Though I don’t recall that I ever saw a movie at The Stallion.  I might have on one of those nights I was just too “Dazed and Confused” to remember.

Today I enjoy more movies streaming to the widescreen in my living room than I see at any of Austin’s modern movie houses.  The food and drinks are cheaper too.  And I have become a big fan of the art of film making from watching a lot of those “old” movies that never grabbed me as a kid.  One of my clients at Current Investments Wealth Management, the private investment company I founded in 2019, is actually a designer of computer-graphic special effects for Disney+.  Based in Los Angeles, his work has appeared on the big screen in the Marvel “Avengers” franchise as well as on the hit streaming series, “Mandalorian.”  When I’m out on the West Coast to visit him and my other California clients, I usually take a little time to explore Hollywood – the neighborhood that produced so many of the cinematic -fantasies that still offer a cool, comfortable retreat from the summer heat back home in our own ‘hood.